Home » Women in the NFL

Women in the NFL 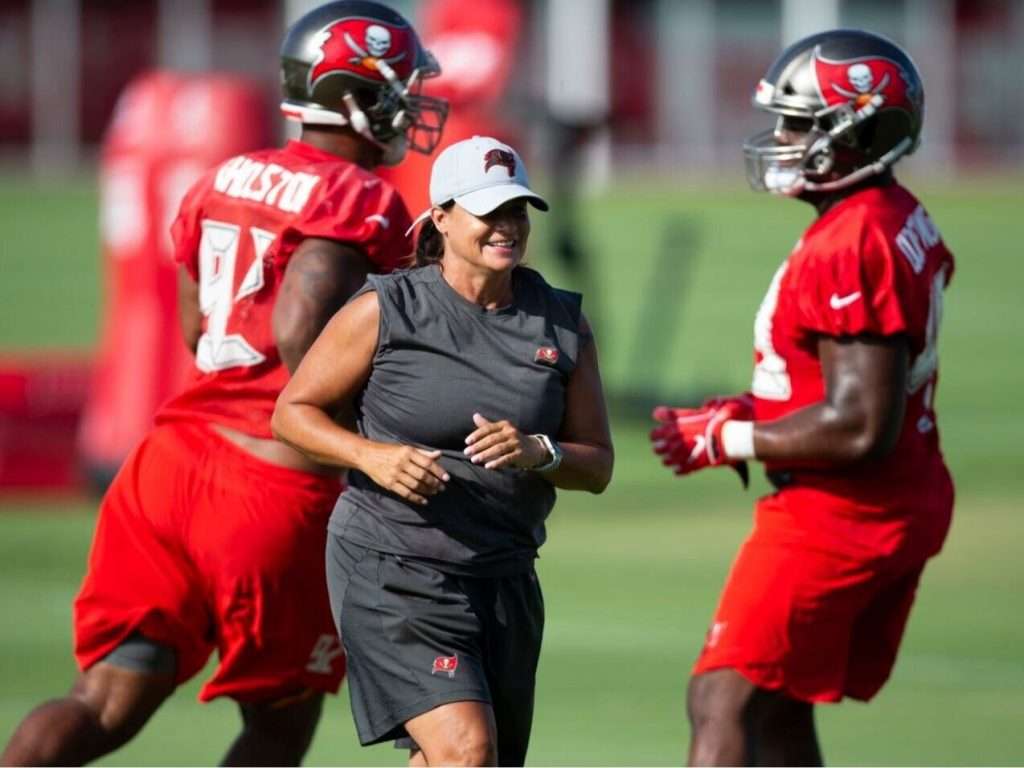 Football season has officially begun, and while the players attract the most attention, we’ve got some fantastic stories from the women who help those superstars stay ready and motivated on and off the field! These workshops hosted by women in the NFL should make an appearance on your must-watch list! Coaches Lori Locust, Jennifer King, Dr. Jen Welter, and cheerleader Deonna Wolf share their career journeys and the lessons they’ve learned along the way.

Coach Jennifer King of the Washington Football Team first started her journey actually as a basketball coach for a women’s collegiate team. After being inspired by the film Hidden Figures, and learning about a family connection to Katherine Johnson, Jennifer developed her new mantra, “To be so good that you can’t be denied.” Her workshop offers many pieces of advice for people in all career fields and says that a big part of having dreams is being ready to receive them. She realized her true dream was in coaching football, so Jennifer attended the next NFL Women’s Forum, where she met and befriended Coach Rivera. Through hard work, Jennifer landed a coaching internship with the Carolina Panthers, and her story continued to evolve from there. Jennifer’s last piece of parting advice is changing your mindset. “You don’t HAVE to do it; you get to do it,” she says.

A woman of many hats, Dr. Jen Welter, talks about dealing with internet trolls and sudden fame in her workshop and says that humor can often be your best ally. Jen has worked hard to help change the conversation around girls in sports and was the first female head coach featured in the Madden Football video game series. She explains that this not only sets a good example for young girls but for young boys as well. Seeing a woman as a head coach shows that women can and should have a place in the world of sports. Something Jen also talks about a lot during her class is using your skillset to help the world around you. When COVID-19 hit, Jen used her skill set to write and publish a children’s book about the virus, using bugs as her characters. This book helps children better understand not only the virus but why it’s important to wear a mask and wash your hands. Jen is also the author of another children’s book, When A Lady Bug Can’t Hug, and her memoir, Play Big: Lessons in Being Limitless From the First Woman to Coach in the NFL.

During her workshop, Coach Lori Locust of the Tampa Bay Buccaneers discusses her career journey and how, despite the long hours, it never once felt like a burden. She attributes this to her true passion for coaching and the game. Lori also discusses why she doesn’t like calling football a male-dominated field. She prefers male-prevalent; the former term doesn’t account for all the women who work in football, on- and off- the field. She feels the same way about the term “breaking boundaries.” Though Lori clarifies that this may be an unpopular opinion, she says this because women today have already broken down those boundaries. She talks about how, when she was eight, she wanted to play baseball. But when Lori and her mom tried to sign up, they were not even allowed in the building. Now, she feels that saying terms like breaking boundaries keeps women “in the weeds.” When talking about calling someone a trailblazer, Lori says, “That doesn’t help you get to your path.” Lori says the focus now should be shifted to offering women actionable advice about entering the sports world.

Deonna Wolf’s journey to becoming a cheerleader for the Philadelphia Eagles took a lot of determination and passion. During her workshop, Deonna discusses that from childhood, she wanted to be a cheerleader. After cheering all through high school and college, she wanted to continue her career with the NFL. However, Deonna discovered that the NFL’s style of cheer was much different than what she was used to, and was more focused on dance, rather than the tumbling she had perfected. Rather than be discouraged, Deonna started going to dance workshops and landed a spot on an AFL cheer team. She built up a support network during her time with the AFL and eventually began attending Eagles cheer team workshops. These workshops proved to be essential, and they taught Deonna what kinds of dances to learn and what expected of her at tryouts. At these workshops and tryouts for the team, she continued to build her network. On her third audition for the team, Deonna landed a spot with the Philadelphia Eagles, proving that you should always keep trying. Her last piece of advice is, “if you have a dream, don’t give up on it.”