Home » What ‘Needle Spiking’ Is and How Women Are Fighting It

What ‘Needle Spiking’ Is and How Women Are Fighting It 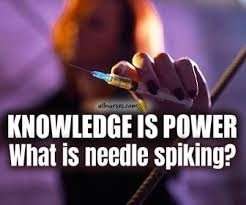 As pandemic restrictions were lifted this fall, terrifying reports of ‘needle spiking’ surfaced across the UK. It’s similar to and just as illegal as drink spiking, but instead of dropping a pill into a glass, the perpetrator uses a needle to inject the harmful substance into the target.

Several survivors in the UK have come forward, sharing stories of blacking out, losing feeling in their legs, going to the hospital and waking with a puncture mark on their skin. One woman, Chloe Ward shared her experience with the BBC:

“We got to the bar, and my friend said I started to slur my words, I lost control of my
body and I just collapsed for about three to four hours,” she explains. The next day, she
found a bruise on her hip and a pinprick mark in her jeans. “I never thought it would
happen to me,” Chloe says.

For many of us, including the survivors, this is shocking. Why is this— drug spiking in bars, house parties and clubs— still happening?

According to Stamp Out Spiking, 98% of spiking survivors don’t report their incidents to the police. Reports of drink-spiking end in incredibly low conviction rates, and women often find their stories discredited and themselves victim-blamed by the police, bar security, and media.

Many people have called upon clubs to act by preventing perpetrators from entering clubs. In the fall of  2021, a series of “Girls Night In” club boycotts took place across London. In addition, a petition demanding that UK nightclubs search guests for spiking paraphernalia upon entry has received over 173,000 signatures.

According to an article by the BBC, the Girls Night In boycotts have made progress; clubs are responding to the loss of revenue. Further, the Bristol City Council has distributed guides to club venues so they know what to do when faced with cases of spiking.

In a statement posted on Twitter, British legislator Nadia Whittome said she stands “in solidarity” with protesters. “We shouldn’t have to do this,” she said.

It’s important to know the signs of being spiked and what to do if you think you’ve been spiked. The only real way to solve this problem is to educate people in ways to “not get spiked,” and prevent perpetrators from having the opportunity to spike them in the first place.