Home » Celebrations of Light In December

Celebrations of Light In December 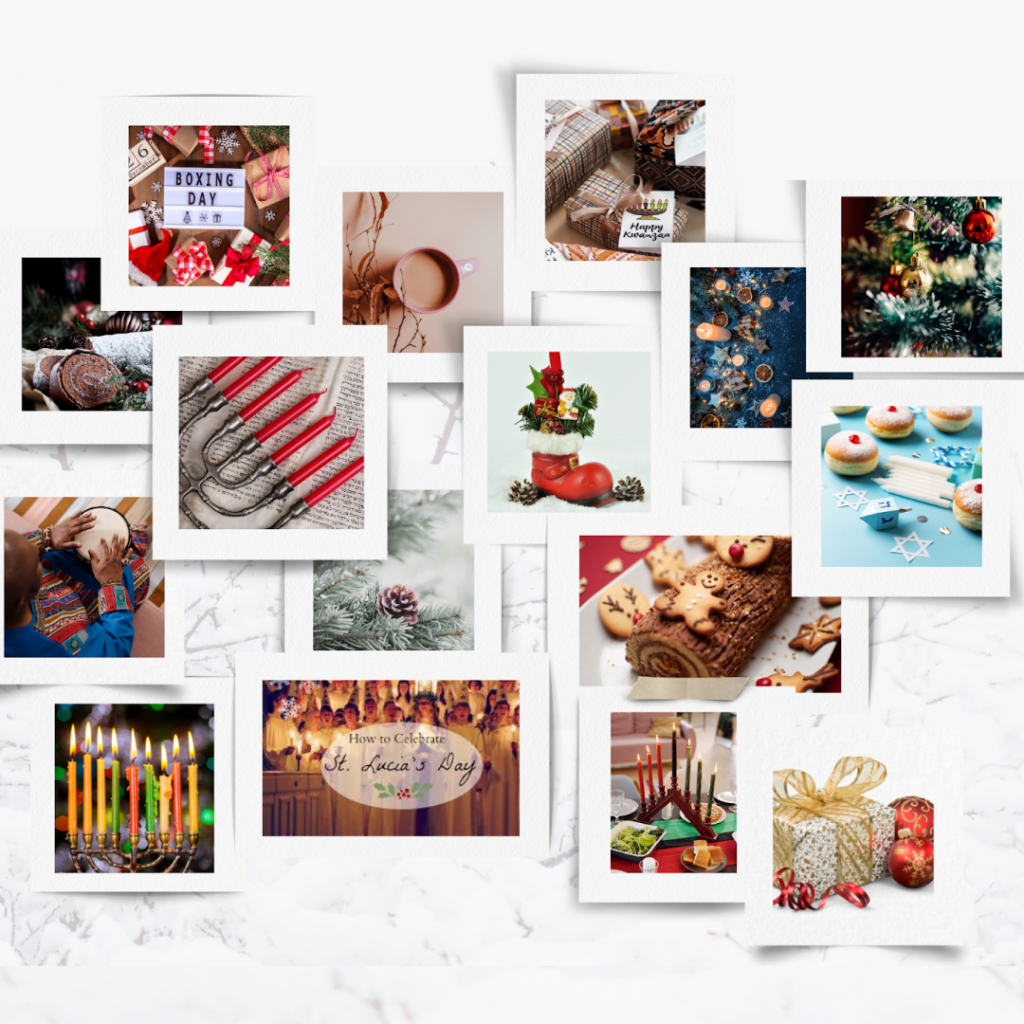 It’s December, one of the darkest months of the year with its shortening days and the winter solstice. It is no wonder that cultures worldwide have found a way to bring light to the month.

Here is a list of the most popular celebrations so you can explore each of them. No matter which of these you celebrate, we hope you are having a happy holiday season!

Always celebrated on December 25th, Christmas marks the anniversary of the birth of Jesus, a spiritual leader whose teachings form the basis of Christianity. December 25th became a federal holiday in the U.S. in 1870.

Decorate an evergreen (real or fake), a room, or the outside of your house with ornaments and lights. Hopefully, sometime in the wee hours of Christmas morning, presents will appear underneath the tree!

Christmas is a day to spread love – you could volunteer, give gifts, cook dinner for someone, or send cards to people in your community.

In the world of Buddhism, Dec. 8 is an important day of celebration, recognizing Buddha’s enlightenment under the Bodhi tree.

To the Buddhist, it is a day of remembrance and meditation. Lay practitioners often string lights to recognize the day of enlightenment and symbolize the many pathways to enlightenment. The lights being turn on each evening beginning on Dec. 8 and for 30 days thereafter.

Celebrated the day after Christmas, December 26th, this date is a public holiday in the UK and some British Commonwealth countries. Boxing Day originated in Britain and while the exact origins are unknown, most theories associate it with charitable giving — not leftover boxes from presents or boxing (the sport). According to National Today, Boxing Day is “its fantastic deals, discounts, and sales,” like Black Friday in the U.S.

Diwali is the Indian “festival of lights” that celebrates the triumph of light over dark and good over evil, and the blessings of victory, freedom, and enlightenment. Celebrated from mid-October through mid-November throughout India, it has become a big cultural event celebrated around the globe wherever followers of Hindu, Sikh, and Jain have settled.

Candles, clay lamps, and oil lanterns are being light and placed throughout the home, in the streets, in areas of worship, and floated on lakes and rivers. Fireworks are also being set off on the night of Diwali—said by some to ward off evil spirits.

The starting date of the  Jewish Festival of Lights changes each year following the lunar calendar, and ​​continues for 8 nights. Hanukkah (also spelled Chanukah) celebrates 2 miracles: the rededication of the Temple in Jerusalem after an unexpected victory by Judah Maccabee, and a celebratory menorah that stayed lit for 8 days even though it only had enough oil for 1. Celebrate with a menorah, foods made with oil like latkes, family, gifts, gelt, and maybe even a Dreidel.

Celebrated from December 26th to January 1st, Kwanzaa was created in 1966 by Dr. Maulana Kareng, professor and chairman of Black Studies at California State University, as a way to promote community among African Americans after the LA Watts Rebellion in 1965.

On each of the 7 nights, a candle on the Kinara (candleholder) is lit, and one of the holiday’s seven principles is discussed. Each principle represents the values of African culture.

Celebrated on December 13th, this holiday marks the beginning of the Christmas season in many Scandinavian countries. Saint Lucy (Lucy meaning “light”) is the patron saint of the blind from Syracuse, Italy. The holiday itself formed  “to bring hope and light during the darkest time of the year” (Britannica). Families in Scandanavia celebrate by having their eldest daughter dress in a white robe, wear an evergreen wreath with candles on her head, and serve traditional foods like ginger biscuits and saffron bread to other members of the family.

Marking the winter solstice, Yule begins on the winter solstice (December 21st or 22nd of every year) and is celebrated for 12 days (hence the song “The Twelve Days of Christmas”. Also known as Yuletide, Yule is one of the oldest December celebrations in the world and began as  “…a celebration of the reappearance of the Sun and the fertile land’s rebirth” (The Old Farmer’s Almanac). One way to celebrate is burning a yule log or with yule log-themed desserts, a yule altar, or an evergreen wreath.